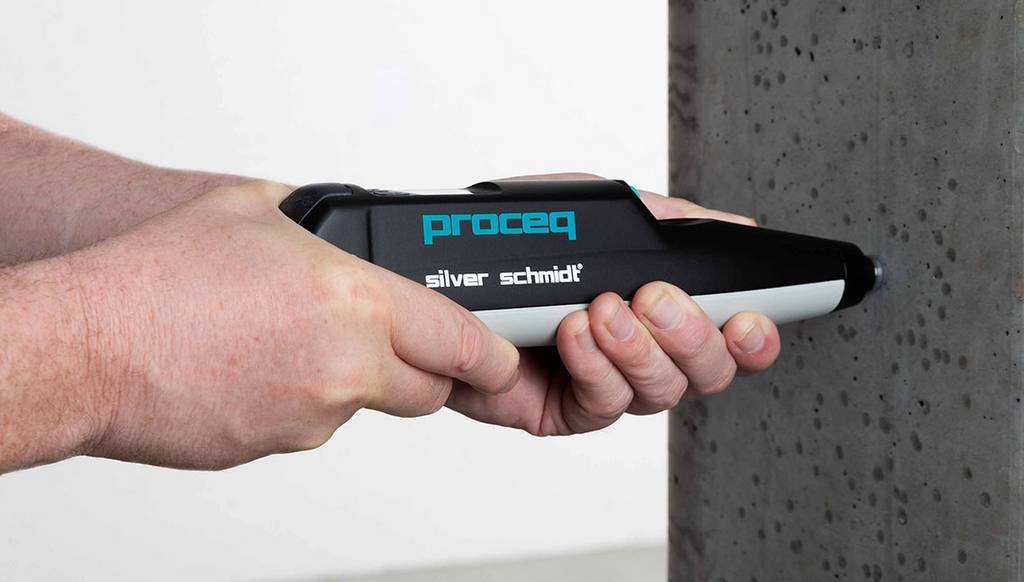 The most common non destructive method for concrete compressive strength estimation is Schmidt hammer (rebound hammer) testing. Most often used is the Original Schmidt type N. This hammer has been around since the 1950s and is designed to be used on mass concrete over 100mm thick. The Original Schmidt has become the basis of every major rebound hammer testing standard around the world.

A proportion of Schmidt hammer users do not use the tool in accordance with the published standard guidance. Results should be gathered by testing an area of concrete approximately 300 mm square. For example 10-12 blows with the hammer are made over this area and the mean average rebound number is calculated and plotted on to a graph (curve). There are generic curves in the operating manual. These are commonly used to produce a result on site where cutting/crushing of core samples is not possible or there is no cube data available from the pour.

The Schmidt hammer provides a comparative test only. It must be used alongside core/cube/cylinder samples crushed in a laboratory. The purpose of the lab crushing is to determine true compressive values to design a custom curve for the structure. Once the curve is designed the Schmidt can be utilised to expedite testing over the remaining areas.

Due to this not being possible a lot of the time we recommend users look more closely at the Silver Schmidt or OS8200. In particular using the 10th percentile curve with the type N variant.

A description of this curve is as follows:

The lower 10th percentile curve is derived from over 2,300 data points collected under controlled tests by the Federal Institute for Materials Research and Testing in Berlin, the Shaanxi Province Construction Science Research Institute and Hunan University in China. The curve covers a large variety of concrete mixes.

The lower 10th percentile curve is recommended by the major standards EN 13791 and ASTM C805/ACI 228.1 to provide a safety margin to take into account the various factors that may affect the in-situ tests. 90% of the data pairs lie above the curve and 10% below. The curve is designed to give a conservative estimate in those cases where the hammer is not calibrated to the specific concrete mix under test.

The classic “R”-value (original Schmidt) is the mechanical travel of the mallet on rebound. It is affected by friction on the guide rod, the friction of the gauge, gravity and the relative velocity between the unit and mechanical parts. This is true for all concrete test hammers currently on the market. A correction is required depending on the hammer orientation at the time of test.

The Silver Schmidt acquires the “Q”-value by measuring the velocity (V) of impact and of rebound immediately before and after the impact. The “Q”-value need not be corrected for impact direction. There is a clear relationship between the “Q” and the “R”-value.

The “Q”-value (rebound V divided by inbound V) represents the physical rebound coefficient. It is virtually free of all the above friction error sources. It is this which makes it the indicator of choice to be used as a basis to convert to compressive strength.

It is our opinion that anyone carrying out Schmidt hammer testing when direct calibration of values to a specific concrete mix are unavailable should consider using a Silver Schmidt (or OS8200) and the 10th percentile curve.

A more detailed look into the Silver Schmidt reference curves can be found here.