We stock many variants of the Schmidt hammer/rebound hammer for concrete hardness testing on site. These units vary from an Original Schmidt with an analogue gauge to the Silver Schmidt and the new Schmidt Live variant.

The Original Schmidt is mostly unchanged from its inception in 1955. It features a sliding analogue gauge on the side of the hammer, influenced by an internal spring propelled mass striking a plunger in contact with the concrete surface.

The Silver Schmidt is a fully digital version of the Original Schmidt which can be downloaded to a PC/laptop.

The Schmidt live works in the same way. It can be used as an Original Schmidt, utilising the sliding analogue gauge if preferred to the Schmidt live app currently available on Apple devices (Android coming soon). 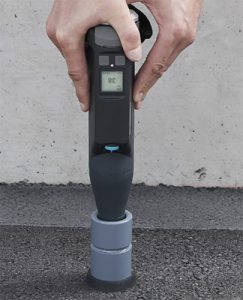 Both hammers are available in type N or type L variants. The Type N has an impact energy of 2.207Nm whereas the type L 0.735Nm. The type N is to be used on concrete >100 mm thick and the type L <100 mm thick. The type N is the most frequently used and is considered appropriate for normal structural concrete.

When concrete hardness testing using a Schmidt hammer it is recommended to take 12 readings per test area. The test area should be up to 300 x 300 mm square. Test locations should be marked up within a regular grid of lines approximately 20-50 mm apart. To avoid any potential bias from the operator.

Many sites require completely non-destructive assessments of concrete, which can prove difficult due to concretes non-homogeneous make up. In reality the Schmidt test results should be taken and proven alongside cores cut from site and crushed in a lab. There should also be a steel reference anvil on site during the testing for frequent calibration checking of the hammer.

One of the reporting requirements in BS 1881-202:1986 is that the hammer in use is tested on a reference anvil both before and after a test is completed. 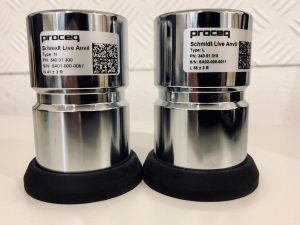 Proceq have now developed a small, lightweight reference anvil for their Schmidt hammers. These are ideal for site use and are available for the type N and type L hammers. The standard anvils are very large and cumbersome, not practical for mobile use.

Our hire units are supplied with their own calibration certificates for trace-ability. Our hire rebound hammers are also fully independently certificated against a full size test anvil and tested on our own anvil before dispatch.